Just days after Mr Nick Griffin labeled the white rioters as wiggers, David Starkey, a well-known British historian, claimed on the BBC Newsnight programme that "the whites have become black" is to blame for the recent riots in England.

There were so many ridiculously misinformed and racist views expressed by Mr Starkey, e.g. his sweeping statement about what he called rap (unsurprisingly, when challenged, his lack of hiphop knowledge was quickly exposed, please Mr Starkey, go and listen to KRS-One, go and listen to Mos Def & Kweli), his rant about Jamaican patois as a "false" language, not to mention his insightful analysis of Enoch Powell's River of Blood speech. The list would go on forever.

What really made my jaw drop was his attempt to justify his view as one based on culture, and not colour. At around 1:55 in the video, he went, "Listen to David Lammy. An archetypical successful black man. If you turned the screen off, so you were listening to him on the radio you’d think he was white". I had to think twice to make sure that I was not interpreting Mr Starkey's remark out of context, but this really is no different from saying, "look I am not a racist - I have a black mate (who happens to be culturally a bit white)".

I don't claim to understand the intricate working of this society, and I certainly do not condone the riots nor the gang culture, but Mr Starkey, I can tell you that one of the undeniable causes of what has been happening is the widening gap between the greater society and the ruling class members - people, I dare say, not too dissimilar to yourself. 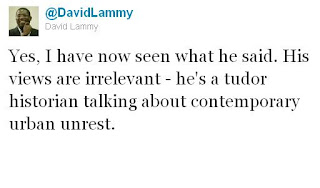 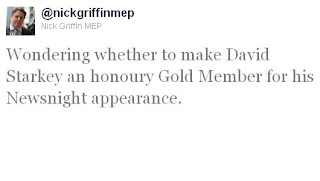