"You should give it a go!" The voice of Roger Baumeister echoed through my head as I let gravity take over, trying desperately to stay with a group of runners on the grassy slope of Pen-y-Ghent.

As a runner and a lover of hills and mountains, I have always been fascinated by the history of fell running in the UK. I had read about all the superhuman achievements in Feet in the Clouds, and I was absolutely gripped by Steve Birkinshaw's Wainwright record attempt as documented in There is no Map in Hell. However, I had never really expected to take part in actual fell racing myself. In a weird way, the more I read about the fells, the more they, and the runners on them, wanted to remain in this shroud of mystery. The idea of fell racing seemed to be just too removed from my daily existence.

This all changed after a chance meeting with a legend. Earlier on in April, Sze Kiu and I were running along the ridge of Mam Tor during our Easter holiday break up in Edale. When we got back down to the village, a walker started talking to me. We started talking about running, and he told me that he used to do a fair bit of running and racing. At some point, we mentioned the Double Bob Graham Round. It soon transpired that he was the previous record holder until Nicky Spinks broke the record in 2016. His name was Roger Baumeister. I was struck by how humble Roger was despite his achievement, and I felt genuinely inspired.

Fast forward a month. Sze Kiu and I were planning our trip up North to see a few relatives end of May/June. Suddenly I had a light-bulb moment - maybe we can attempt our first fell race! When I discovered on the Fell Runners Association website that there was to be the Pen-y-Ghent fell race in the Yorkshire Dales in early June, I immediately got in touch with the organiser from the Settle Harriers, Gary, to enquire about the event. I did not know whether it was going to be an event dominated by local club runners, but his response was extremely welcoming.


So on Saturday 2 June, we found ourselves driving into Horton-in-Ribblesdale, the starting/end point of the race. We parked our car in a designated field next near the village centre. Minutes later, another car pulled up beside ours. Its owner was a runner from Barlick Fell Runners, who started chatting to us, and we talked more about the route. The race is classified as an FRA AM-category race, which basically means it is medium distance (6.8 miles) and steep (1700+ ft ascend). We paid our £5 per-person entry fee, and pinned our race numbers to our tops. Before long, more runners arrived and we started running around the field to warm up. There were no pre-race shenanigans. It was all a fairly low-profile affair (although the village gala was also taking place at the time). Ten mins before 3pm, Gary gathered the 140 bumbag-wearing runners to the start line, and with a simple send-off message of "look out for one another on the hills", we were off. We made our way across the bridge up to the foot of Pen-y-Ghent. As it was quite a misty day, I could not really see what was high up above us, and it felt slightly surreal. 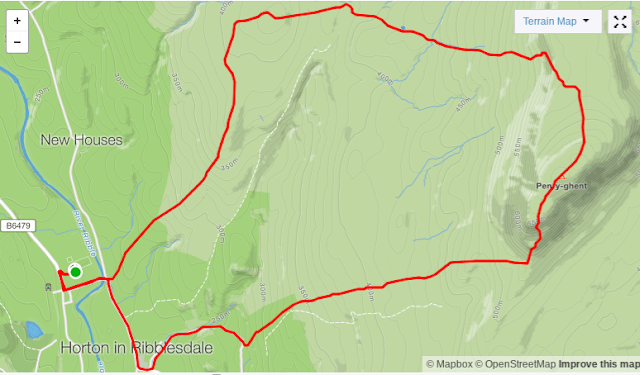 I stayed with Sze Kiu for a mile before saying goodbye to her as I picked up my pace to start the climb. Soon slope turned into steps. Steps turned into higher steps. I had to resort to the hands-on-knees technique, while making sure I didn't lose pace. After 2 miles of relentless climbing and a short flat section, the ground dropped abruptly, and nothing could have prepared me for what was to come. I paused for half-a-second, and a bunch of runners out of nowhere sprinted past me downhill! Trying to follow them, I started to pick up my pace again. I looked at my watch and I was surprised to see that I was running close to 6:30 min/mile, and people were still overtaking me. I watched how the other runners were planting their feet. I soon learnt to relax my body, and started to trust the springy mossy ground, while still very much concentrating on where I was heading. It was hard work trying to keep up the speed, but it was becoming actually quite enjoyable. Suddenly it all clicked, and I felt I knew what fell racing was all about.

There was another short hill to climb before a "gentler" descend down to the village. Runners were cheering when I got to the end. I was happy to see plenty of cakes waiting for us tired runners! My time was 1 hour 7 minutes, almost 20 minutes behind the fastest runner. It was a respectable time, and I was more than happy with my middle-of-the-pack finish. Sze Kiu finished 19 minutes after me (1 hour 26 minutes), and I was happy to see how she crossed the finish line with a big smile on her face. For both of us, it was an incredible experience. It was pure, unpretentious running - just a bunch of runners enjoying the hills.

I must thank Gary and Karen, and the rest of the Settle Harriers, in particular the marshals on the hill, for putting on this amazing annual event and for cheering the runners along the way. We felt very welcomed and we will most certainly be back next year!
Email Post
Labels: running yorkshire

HH said…
This comment has been removed by the author.
6:06 pm