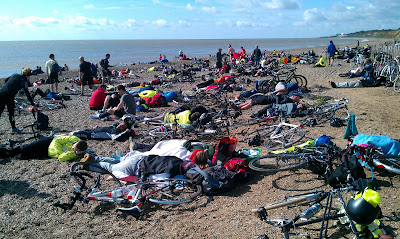 Two consecutive punctures only days before the ride was certainly not a good sign. Typically the forecast had been predicting heavy rain after a week of relatively fine weather. But then there is no room for common sense, nor cowardice, on the way to Dunwich.

I bought two rolls of Velox to replace the crappy stock plastic rim tape, which I blame for the two punctures, and hoped for the best as my bottom prepared itself for the next 9 intimate hours with my Brooks Team Pro saddle.

The Dunwich Dynamo is a semi-organised bike ride in the UK where cyclists from all walks of life pedal from London to Dunwich Beach 115 miles away overnight under the glorious July full moon. I arrived in Hackney at 8:30 pm for the 2011 edition of this popular annual event. London Fields for once lived to to its name, after hours of torrential rain. Having collected the coach ticket and the route sheet from outside the Pub On The Park, my friends and I joined the stream of hundreds (or > 1000?) of cyclists in our mass exodus to Essex and Beyond. The initial hour consisted mostly of red-light stops and getting strange looks from motorists and pedestrians. As the number of traffic lights started to decrease (so did the number of roadside street lamps which had been aiding us in our progress) the real adventure began. The fleet of red LEDs along the tree-lined roads out of London was really quite a sight. We started to pick up the pace.
Half an hour cycling into the night, the formidable red line was suddenly interrupted by the flashing light of an ambulance somewhere outside Epping. Unfortunately there was an accident. (which I think was not too bad from what I have read on the internet afterwards) As we rode past, the sight of the participant being stretchered into the ambulance was a stark reminder that any moment of carelessness could lead to grave consequences in such situation.

Past Chelmsford, we reached the half-way point at Sible Hedingham some time after midnight, and stopped for some food. We were extremely lucky with the weather. Despite the downpours during the day, the evening had been completely dry. The brief stop however made us release that the temperature had dropped quite significantly since we started at 9pm. Jacket on. 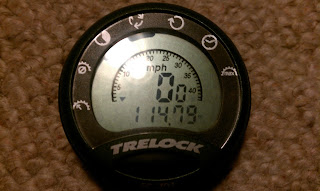 As the great snake of red LEDs wound its way through the countryside of Suffolk, I found the sound of gear grinding and free wheel clicking oddly soothing. Only the occasional calls of "car" echoing through the peloton to warn riders of coming vehicles reminded us that we were not the only insane people out on the road. Long sections of descents and short sections of ascents were the order of the night, and it was on one of these climbs that I had my share of misfortune. Misjudging the climb, I decided to stay on the big front chainring. I was cranking really hard, even on a big rear cog, until half-way up, I inevitably decided to shift to the smaller front chainring. As a more experienced climber would probably have warned me, the chain came off, and I ended up pedalling into the void. "Oh shit", I went. Somehow I managed to unclip my right foot from the SPD pedal and spared myself the embarrassment of kissing the tarmac. My friends helped me put the chain back on, and we were off into the darkness again.

Apart from seeing a Boris bike (good work!) by the roadside and stopping a couple of times for food and toilet, I honestly could not remember much from the time between 2am and 5am. My tiredness and a slight stomachache (probably from eating too much pasta during the day...) made me wish the whole thing would end soon. The sun started to come out, but I was still feeling cold from the wind that kept on penetrating my windproof. Finally we saw road-signs that seemed to lead us closer and closer to Dunwich, but before we got anywhere near the coast, there was more rough riding in store. A "By Road" at 100 miles leading to Darsham was in pretty bad conditions after the rain. While the guys in mountain bikes were happily rolling through the sand/mud, I was desperately trying to avoid skidding or getting a puncture. That was easily the hardest hour of the whole ride.

As the sun started to warm up East Anglia, my legs started to spin more freely, and I was feeling less miserable. I started to take in the scenery and enjoy the riding more. The old Dunwich city wall was a welcoming sight. At around 7:00am we arrived at the beach. Having congratulated ourselves on finishing the ride, we were quick to get to the breakfast queue. During the breakfast, my mind was still pretty blank from the lack of sleep and the lack of energy in general. We decided to crash out on the beach. Bathing in the warm morning sun, I closed my eyes and immediately fell asleep. The commotion a couple of hours later of people starting to queue up for the return coaches woke us up and it was time to head home.

It was only on the coach when I regained my sense that I thought back about the previous 12 hours. It was simply the strangest thing I had ever done, and no words could ever describe the excitement, the sheer emotional experience of riding through the night with hundreds of people who were there for no other reason than to do something slightly crazy.

I will definitely do it again. Absolutely...

P.S. There are loads of excellent blog entries out there listing tips for surviving the Dunwich Dynamo. One thing I would say to anyone who wants to give it a go is that don't worry if you don't have the latest ultra-light roadbike or if you don't spend all of your leisure time on a bike saddle. Dunwich Dynamo is not a race. Just wear something comfortable and warm, and learn how to fix a puncture (if you don't already). You will be OK!
P.S.S. Big thanks for the Southwark Cyclists for being the driving force behind this excellent event.
Email Post
Labels: cycling